Films at Bristol’s Festival of the Future City 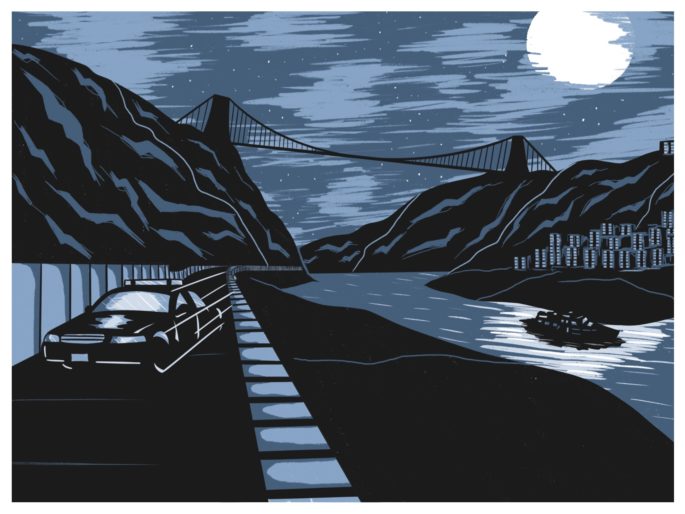 The festival will also feature a season of classic film noirs screening at The Cube, including titles such as The Naked City, The Asphalt Jungle and Kiss Me Deadly. See the full selection of films and book tickets here.

We’re delighted to share the following extract from Mel Kelly’s Film Noir and the City blog, which explores the depiction of the city in film noir, asks what constitutes a film noir and what such films can tell us about urban living.

Film Noir and the City
written by Mel Kelly

Film noir: an overview
French critic Nino Frank was among the first to use the term ‘film noir’ to describe a certain style of Hollywood movie. This was in his article ‘Un nouveau genre ‘policier:’ L’aventure criminelle’ (‘A new police genre: the criminal adventure’), which was published in the magazine L’écran français in 1946. ‘Film noir’ became more widely used from the 1970s onwards. It is usually applied to films made in the 1940s and 50s, with later works that replicate or reinterpret some of the noir elements being known as neo-noir.

In Raymond Borde and Étienne Chaumeton’s Panorama du film noir américain 1941–1953 (1955) – the first book to attempt to identify and catalogue film noirs – the authors refer to the difficulty of fixing upon a definition. Most film noirs are crime stories, but they also include gothic romances, heightened melodramas and gritty films addressing social problems. Film noir is not a genre but more of a mood or an atmosphere conveyed through plot, character and visuals.

A film noir may contain some or all of the following:

Many stories were adapted from pulp fiction as well as from more highly regarded hard-boiled crime novels by the likes of James M Cain, Raymond Chandler, Dashiell Hammett and Cornel Woolrich. The photographs of Weegee and the paintings of Edward Hopper are among visual influences drawn from other cultural forms.

The majority of film noirs were originally made as B movies – destined to be the low-budget second feature on a double bill – that only retrospectively gained critical acclaim and the recognition of artistic merit. According to the website American Film Noir, the most prolific of the individual film noir studios between 1940 and 1956 was RKO closely followed by Warner Bros. However, almost 40 per cent of the films were made by independent producers.

Film noir in the city
Most films identified – however loosely – as noir, have a modern urban setting. This is not necessarily a city – it could be a small town – but a large city offers a particularly potent combination of the alienation, paranoia, chaos, fear, corruption, greed, social division and loneliness that lie on the other side of the American dream.

A familiar noir scene takes place on a rain-slicked city street at night. Flickering neon is reflected in oily puddles; the roar of a passing car competes with discordant music blaring through the swinging door of a basement club; and a hunched, trench-coated figure waits in a darkened doorway. The scene might have been shot on location but was more likely to have been filmed on a studio backlot. The constraints of budget and time inspired innovative creative solutions by which to generate the necessary ambiance.

The image of the city in film noir is largely a negative one with a sense that any glamour, excitement or cultural sophistication on offer are for the powerful few. For the protagonist the city is an ambivalent place of menace and mental unravelling.

Among city-themed topics to be addressed in relation to film noir are:

(Continue reading Mel’s blog, which includes examples of film noirs notable for their depiction of a city, here.)