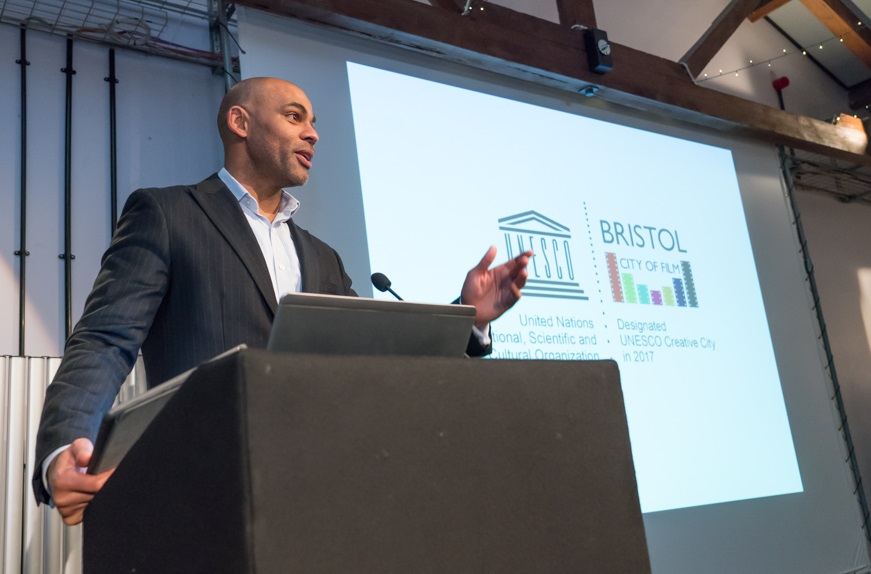 Opened by Mayor of Bristol Marvin Rees, the event was attended by UNESCO UK, fellow UK City of Film Bradford, and representatives from national partners including the BFI, Production Guild, BBC and Channel 4.

Bristol’s five-time BAFTA-winning screenwriter Jack Thorne (Kiri, National Treasure, This is England ’86, ’88, ’90) said: “Bristol is my home city, so I’m biased, but I think it’s the most fascinating city in the country. There’s always something to do and experience; from the incredible outdoor spaces to the People’s Republic of Stokes Croft; from the brilliant Bristol Old Vic to the amazing carnival. I’m so proud it’s got this new City of Film status, it’s a place where stories should be told.”

Marvin Rees, Mayor of Bristol says: “Tonight marks the beginning of a new opportunity for Bristol to grow our already booming cultural sector and connect the industry’s success to communities across the city. As a UNESCO City of Film we have a unique chance to harness the power of a diverse industry and empower people to collaborate on combating inequality and break down the barriers to opportunity.

“Bristol is an outward looking city that understands the benefits of cooperating with partners across the world. Being part of the global UNESCO network with fellow creative cities means we’re expanding our ability to build international relationships and exciting new partnerships. Our goal is to ensure that those relationships directly benefit all communities across the city and help establish opportunities to support filmmaking talent, education, training and employment, whilst also widening cultural participation and engagement for our film audiences.”

Mark Cosgrove, Watershed Cinema Curator and Film Hub South West & West Midlands Chair said: “The UNESCO City of Film award is fantastic recognition of the rich film culture in Bristol and of the vital role film plays in the creative life of the city. Since 1982 Watershed has been presenting and celebrating the diversity of world cinemas. Audiences continue to be passionate and enthusiastic- and this passion and enthusiasm I am sure contributed to the UNESCO recognition. We very much look forward to working with partners across the city to develop local talent, production and audiences and to promote Bristol as a unique City of Film destination.”