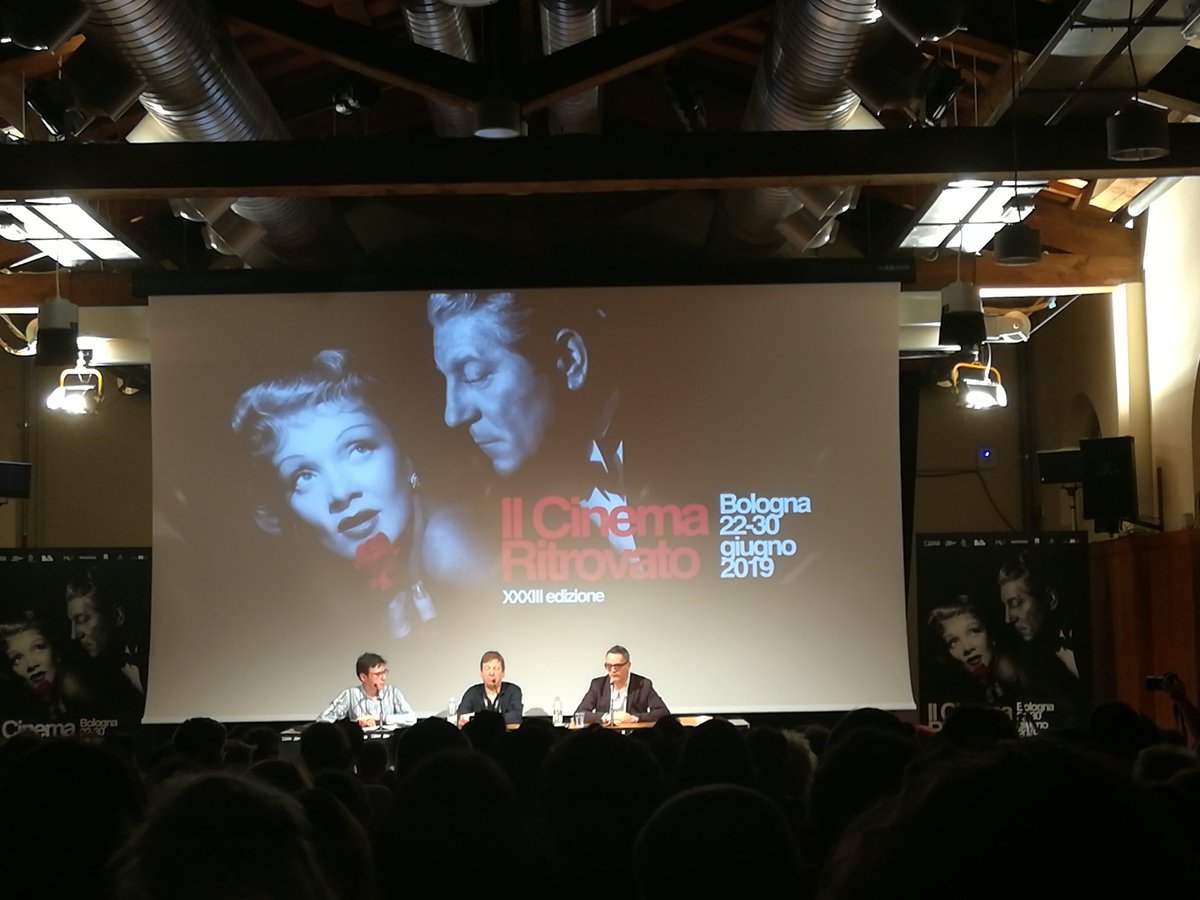 Each year, thousands of cinephiles flock to Il Cinema Ritrovato. It’s no wonder – for more than 30 years this unique festival, which runs over 9 days across 6 cinemas, has been giving audiences the chance to rediscover the golden age of cinema, see the latest film restorations and experience cinematic rarities in their original formats.

Before our visit, Madeleine Probst (Vice-President of Europa Cinemas and Watershed’s Managing Producer) gave us an overview of the festival and what to expect, and outlined her role leading the Europa Cinemas Audience Development & Innovation Labs. The festival is organised by the Cineteca di Bologna, which also forms the festival hub – it’s an arts cinema complex, a bit like Bristol’s Watershed, with an amazing outdoor cafe.

The programme is jam-packed with rare and lesser-known films, with a particular focus on early cinema and silent movies. As Kathrina Glitre (Senior Lecturer, BA Film Studies & MA Contemporary Film Culture) says, “Il Cinema Ritrovato opened our students’ eyes to new worlds of film culture, past and present. The mix of silent, classic and cult movies ensured everyone found something to love.”

The apex of the festival are the magical, free outdoor evening screenings in Bologna’s Piazza Maggiore, which attract audiences of over 5000. We watched Miracle in Milan (dir. Vittorio de Sica, 1951), Easy Rider (dir. Dennis Hopper, 1969), and Los Olvidados (dir. Luis Buñuel, 1950) – all films which explore life on the margins. The experience of watching these films on a gigantic screen with such a huge audience was electrifying. Freya Billington (Senior Lecturer, UWE Filmmaking) was “completely stunned by the power and present-day relevance watching Easy Rider on the big screen in Piazza Maggiore with a huge crowd. For a film seen as ‘so much of its time’, it felt incredibly important people should watch it in the Trump-era”, she said.

Other highlights included Nicolas Winding Refn and Peter Conheim talking about their online curational project, www.byNWR.com; seeing a vibrant 50-year old 35mm print of Alfred Hitchcock’s Under Capricorn (1949) on the big screen – the colours still true because they used the Technicolor triple dye transfer process; a lesser-known hard-boiled film noir, The Man Who Cheated Himself (dir. Felix E. Feist, 1950) and Topi Grigi, a silent film series with live piano accompaniment, screened in the welcome cool of Cinema Modernissimo, an abandoned underground cinema beneath Piazza Maggiore,; and too many more to mention.

The field trip gave students and staff an opportunity to come into contact with an extraordinary range of films. I got a real buzz seeing the students engage with films they might never have been exposed to but for this unique festival. Paolo Russo, a student on the MA Contemporary Film Culture, says; “This festival was a beautiful reminder of why I love cinema. To find hundreds of cinema lovers sharing the same excitement in discovering forgotten gems in one of the most beautiful cities in the world is hard to beat. Watching the uplifting and imaginative Miracle in Milan on the big screen in Piazza Maggiore was such a fantastic way to start the festival. El Topo was an overwhelming acid trip that I won’t easily forget. While watching the incredibly rare Topi Grigi in an abandoned underground cinema accompanied by live music is something I could find only there in Bologna. Phenomenal food as a bonus. Three days were not enough.”

Many of the students reflected on how their visit  informed their wider study of film and filmmaking. Dom (L2, Filmmaking) says; “As a student that struggles to look back at older works, the festival really enlightened my knowledge as to how the history of cinema has changed from what it was to what it is today. What I’ve learnt from the trip has both inspired and pushed my brain to keep writing new works ready for next year.”

The trip was also an opportunity for students from different year groups and different programmes spread across two campuses, to get to know each other. Joe (L1, Film Studies) says; “It’s a way of experiencing what true film culture is. Finding new favourites and revisiting old ones in an incredible setting, surrounded by like minded people and friends!” Many are intending to return. Zoe (L1, Film Studies) says; “I’ve been inspired to go back next year, my love for Italy has grown substantially.”

UWE students will be volunteering at the Cinema Rediscovered Festival at Watershed, which is inspired by Il Cinema Ritrovato, in July.

If you’re thinking of going next year, The Guardian’s Pam Hutchinson has written a really helpful blog post – ‘Bologna Tips: A Beginner’s Guide to Il Cinema Ritrovato’ – full of tips on how to get the most out of the festival. Pam will also be introducing the UK Premier of the new 4K digital print of Notorious at this year’s Cinema Rediscovered on 25 July.