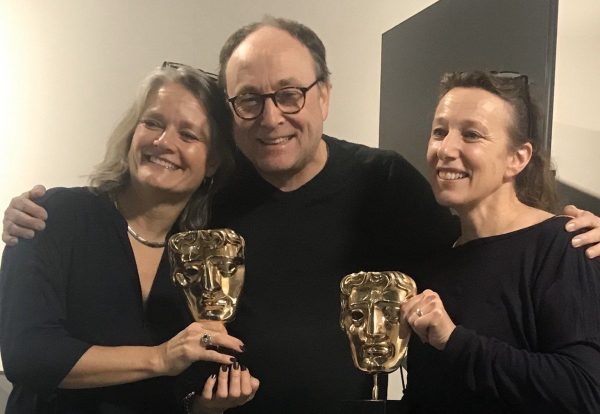 Huge congratulations to the team behind Mark Jenkin’s Bait, the debut feature from Totterdown-based production company Early Day Films, which was awarded the BAFTA for Outstanding Debut by a British Writer, Director and Producer at the prestigious annual awards on 2nd February.

Speaking to the South Bristol Voice about the ceremony, producers Kate Byers and Linn Waite said: “It was the most fantastic evening. It was brilliant. The Albert Hall is an amazing venue because it is huge but it’s also quite intimate, and so it’s got a fantastic atmosphere.”

Linn added: “The South West has been amazing. Normally, if we’re going to talk statistics, in terms of the box office in the UK – even for big blockbusters – the South West accounts for no more than 5%. But with Bait, 35% of the box office came from the South West. So we want to say a big thank you to anyone out there who has seen it, spoken about it, written about it, or spread the word, because it really has been word of mouth, and the support has been phenomenal.”

“Watershed – we love them. They have been remarkable. Mark Cosgrove as a programmer has allowed the film to grow, and it’s worked; I think Bait was their second most successful film last year.”

Bait was also nominated for Outstanding British Film, in good company alongside titles including Sam Mendes’ 1917, Dexter Fletcher’s Rocketman and Ken Loach’s Sorry We Missed You.