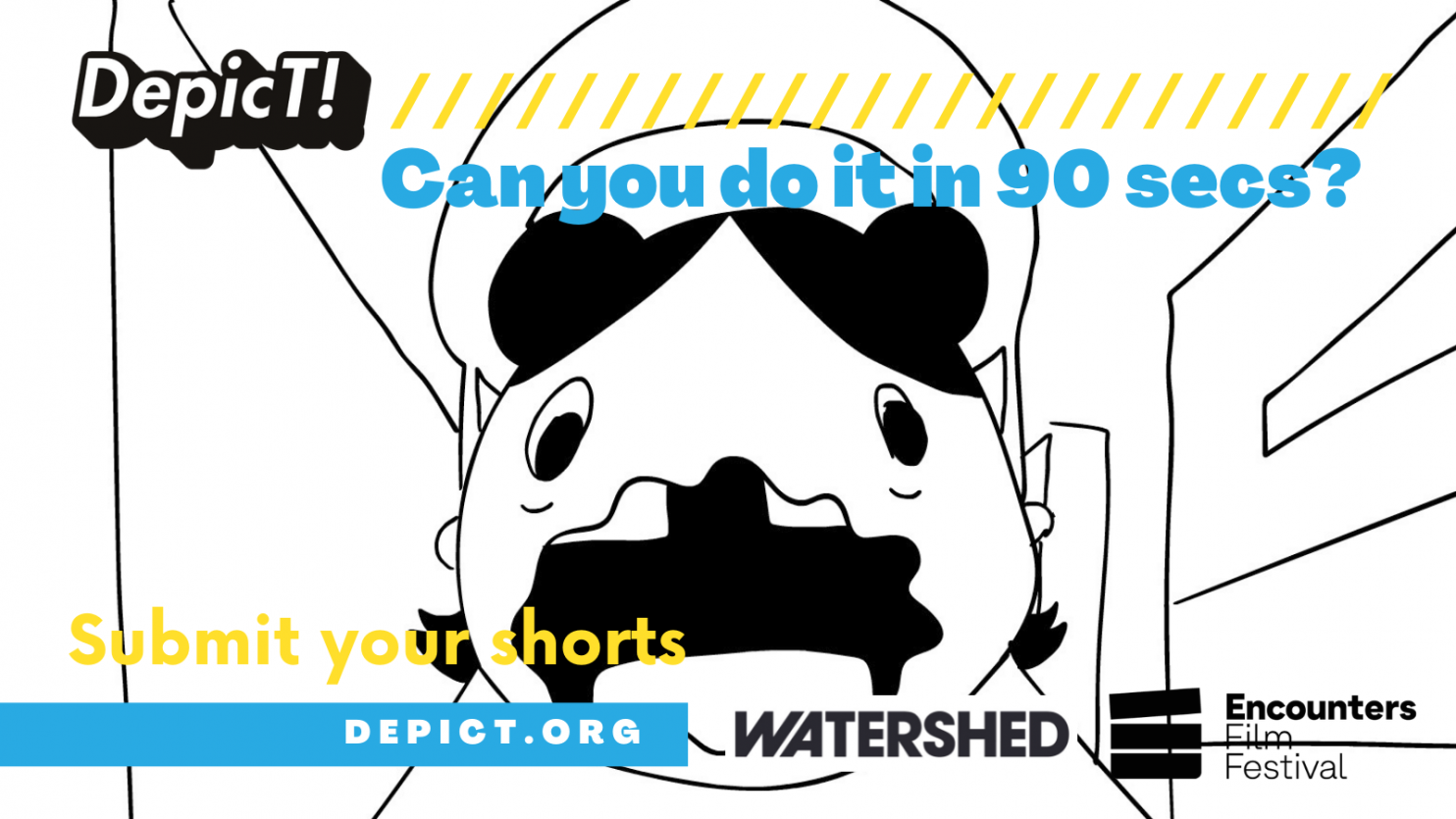 The Bristol City of Film-based competition is calling for creatives from around the world to submit their shorts in 90 seconds or under to be considered for this year’s shortlist and Awards.

It doesn’t matter if you’ve got a big budget or a tiny one; whether you specialise in documentaries, animation or live-action – as long as your film is less than a minute and a half in length, you can submit your short to this year’s competition for free.

Depict’22 is looking for imaginative, original, and engaging shorts, and offers the best of these works and the talent involved support and exposure. If you make it into this year’s Depict shortlist, your film will be showcased online at depict.org and at the upcoming edition of Encounters Film Festival (taking place in Bristol from 27 Sept – 2 Oct 2022), the UK’s leading short film, animation and virtual reality festival, also an official gateway to the world’s most prestigious awards including the Academy Awards®, BAFTAs, BIFAs and the European Film Awards.

Connecting industry and audiences, the festival celebrates the creativity, diversity and the impact of short film. So whether you are a filmmaker looking to launch or develop your career, an industry professional wanting to stay abreast of what’s new, or a film lover wanting to soak up the festival atmosphere by watching great films and special events, Encounters offers priceless industry exposure.

Shortlisted filmmakers get a festival pass, are in with a chance of winning up to £2,500 prize money thanks to sponsors including The Royal Photographic Society and Aardman Animations as well as other exclusive prizes and opportunities to help you get to the next stage of your career courtesy of partners such as Channel 4’s Random Acts, BFI NETWORK, BAFTA and NFTS.

Previous Depict winners have gone on to have their work screened at international film festivals, been picked up by commercial distributors, carved themselves successful careers in the film industry and beyond.

Wake Up directed by Tiago Teixeira

Last year, the Main Depict 2021 Award of £1,500 and a lifetime Shooting People membership went to Wake Up by director Tiago Teixeira, who had the following to say about his experience: “Winning the Depict award was a fantastic surprise and a great honor. It helped me to fund a new short film and gave me the confidence to keep pursuing my filmmaking career. My main tip for anyone entering this year is to shoot a film that means something to you, and not to try adapting your idea to what you think would be more palatable for the festival. You might be surprised.”

Some of the shortlisted animations were also awarded a special mention and given access to an Aardman Academy Stop Motion Foundation course. Here’s more on their experience and their top tips:

“For filmmakers entering this year, we’d say create something that you want to see and have fun with it!  Making ‘Cycling with Molly’ has been a surprise at every turn, we created it during lockdown for fun and we’ve really enjoyed seeing how it’s been received.” Sara Chia-Jewell and Mulletman (Cycling With Molly)

“It has been so helpful. It’s a competition that has really interacted with the films and filmmakers beyond screening and introduced us both to peers and to potential work in the future. The number one tip I have for filmmakers entering this year, at least once they’re in the competition, is watch every film you can. There is so much interesting work and sources of inspiration for future work.“ Alicia Froy Johnson (Sensory )

Sound like your kind of challenge? As long as your film is under 90 seconds or less, you can enter your film to Depict – it is the most accessible competitive strand  of Encounters Festival with no submission fee. Submit your short(s) via FilmFreeway .

Submissions close on Monday 13 June 2022 so there is plenty of time to read the rules and get some more inspiration by checking out the Depict archive of over 20 years of teeny, tiny shorts.