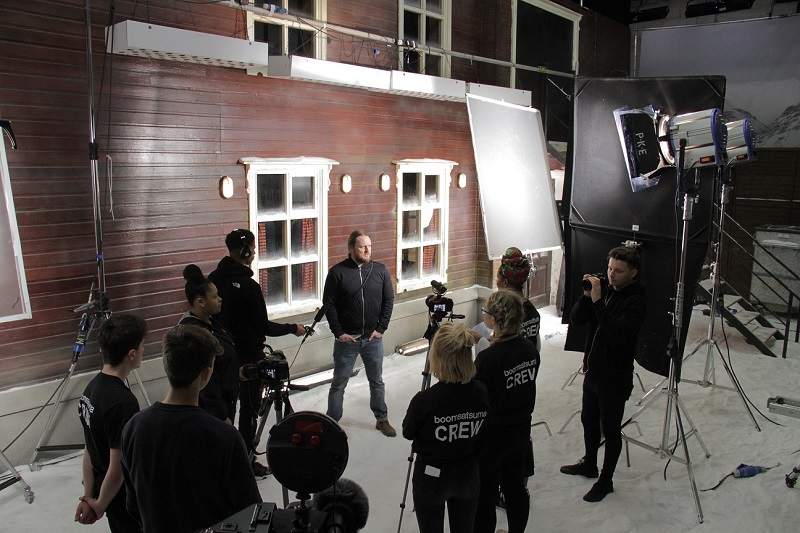 Launched in September 2018, The Bottle Yard’s Film & TV Production Diploma, delivered by Boomsatsuma in collaboration with Bristol City of Film, gives 16-19 year olds the chance to study in a working studio environment.

Alongside these curriculum-facing projects are a number of extra opportunities that arise from the unique fact that this course is based at a living and breathing TV and film facility, including work placements on active productions, behind the scenes set tours and insights, use of facilities and runner positions.

The OCR Cambridge Technicals Extended Diploma is a nationally recognised qualification equivalent to 3 A Levels and worth up to 168 UCAS tariff points.

It was an inspirational journey for a group of students who took part in a unique skills experience on the set of Sky Atlantic’s Fortitude at The Bottle Yard Studios, made possible thanks to access granted by production company Fifty Fathoms.

Students shared their ambitions for the future with Mayor of Bristol Marvin Rees, who talked about Bristol’s commitment to widening access to TV & film education to young people from all backgrounds across the city. The film they produced about the day formed part of their boomsatsuma Media Production Diplomas.

In October 2018, Fifty Fathoms returned to Bristol for a preview screening and Q&A hosted at Watershed by RTS Bristol and The Bottle Yard Studios, preceded by a screening of the students’ short film. Earlier that day, 24 local writers attended a workshop with Fortitude creator Simon Donald, Exec producer Patrick Spence and script producer Ben Stoll.

The Bottle Yard’s Fiona Francombe said: “It was an honour to be Fortitude’s official home for this new series and we feel sure it sends out the message – Bristol, City of Film, is the ideal place to make great drama.”

Unit publicist Iain McCallum said: “At Fifty Fathoms we pride ourselves in working closely with the talent we find on our doorstep wherever we happen to be filming. There is no shortage of amazing talent in Bristol and it was a huge pleasure to welcome these young people to our set and still more marvellous to see the fruits of their labour on the big screen.”

A big thank you to all involved for bringing together this valuable experience.