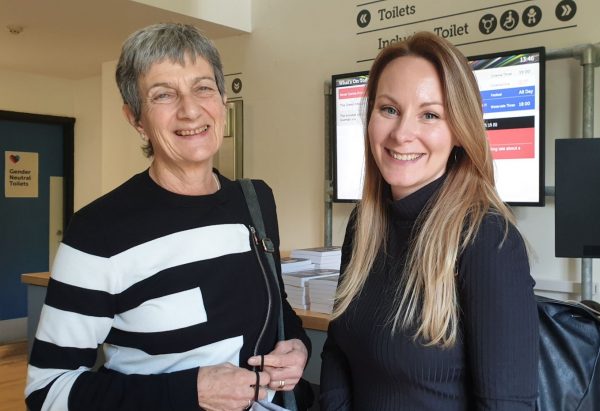 Karen Merkel with Bristol City of Film’s Natalie Moore at The Importance of Film and Cinemas to Cities event, part of Film 2021, held at Bristol’s Watershed in October 2021

UNESCO’s Creative Cities Network includes 13 UK cities. Here, we share a recent Arts Professional article by Karen Merkel, Non-Executive Director at the UK National Commission for UNESCO, as she “shines a spotlight on a programme which demands international collaboration.”

The following article was originally published on Arts Professional on 23 March 2022. To view the original post, click here.

Rooted in their local communities, UNESCO Creative Cities are part of a national and global network working together to use their specific creativity as a dynamic platform for economic, social, cultural and environmental development.

As a Non-Exec at the UK National Commission for UNESCO, I thought I knew all about the creative industries, but I was amazed to discover the 13 cities that are UK’s UNESCO Creative Cities. (Belfast, Bradford, Bristol, Dundee, Edinburgh, Exeter, Glasgow, Liverpool, Manchester, Norwich, Nottingham, Perth and York)

There are seven fields of creativity recognised by the UNESCO programme: crafts and folk art, design, film, gastronomy, literature, media arts, and music – all of which are represented in the UK except for gastronomy. I wonder why?

Being awarded a UNESCO Creative City designation means cities are required to collaborate with others in their field globally, working on joint projects and events. They must attend biennial gatherings, hosted by one of the cities, bringing them into contact with their international counterparts. This is what singles it out from other cultural city schemes.

In the seven years since I encountered the programme, I’m still amazed by the ingenuity and positivity. Cities receive no funding on award of the much-prized status. It’s assumed the UNESCO’s hallmark of quality will attract its own support – which is the case, to a degree. What is very effective, though, is how the name pulls in wider interests.

Supporting the role of culture in building sustainable cities is critical for UNESCO.  And while every Creative City is focused on this overarching aim, access to participation is the top priority.

A good example is Bristol City of Film which has developed a tremendous opportunity with its local FE sector and Bottle Yard Studios to create a Film & TV Production Diploma [delivered by boomsatsuma], giving 16–19-year-olds the chance to study/work in real studio environments.

The expanding film sector in Bristol is as pleased as the FE Colleges with the scheme, all wanting to see local young people’s active participation.

But each City interprets its brief differently. Go north and find Yorkshire with two thriving Creative Cities. Bradford – the first ever City of Film, and York City of Media Arts.

Bradford prioritises work in schools, with filmmakers teaching film literacy skills to young children. Together with Bradford University, it is creating new courses and exchanges with other UNESCO film cities across the globe.

It has a leading ambassadorial role too, using film as both a creative discipline and for its commercial potential, working with cities in China, India, Japan, and Korea.  Alongside this, it has been extraordinarily successful in its exploitation of Bradford’s locations for films and television, most notably Peaky Blinders.

Meanwhile, York has created the first completely new Guild in 700 years. It was formed to support the rapid growth in creative industries in the city and to provide a new business and social network. It’s the most diverse, young and gender balanced of the City’s Guilds with more than 200 paying members and is the focal point for generating new media arts initiatives.

As importantly, ACE supported its splendid Mediale, turning York into sites for stunning multimedia installations which had people flocking to see them. I could hardly believe the huge turn-out – a real cross section of support and excited engagement. It was truly inspirational.

The UK’s three Cities of Music have much in common as places – Glasgow, Belfast and Liverpool – with their shared communities, histories and cultures. Belfast, the newest ‘kid on the block’, only just designated, will take its inspiration from the other two to weave music into public spaces and places, ensuring the power and benefits of music can be felt by all who live in, work in, and visit the city.

The UK has five Cities of Literature: Edinburgh, Exeter, Norwich, Nottingham, and Manchester. Norwich and Nottingham together hosted all 28 international cities of literature for the first time. Of these, Nottingham has launched a Young City of Literature Ambassadors, a skills development opportunity for secondary school students which recognises and rewards their talent and potential with development and networking – and celebrity!

Meanwhile, Manchester is now in its 4th year of delivering fine work in the Mother Language field. This began with an event for and by Punjabi poets held at the university which was almost overwhelmed by the unexpected size of the audience, many of whom had never been in a university before.

Immediately afterwards, representatives from the Polish community who’d attended came and (nicely) demanded the same event for themselves. Its success has brought citywide support and is now a multi-community annual event.

Much more intimately and no less creative, Exeter City of Literature lends its brand to projects such as Storybook Dads at HMP Channings Wood connecting prisoners to their children, inspiring reading through recording stories on DVD. The scheme has inspired similar programmes in the USA, Denmark, Hungary and Poland.

Creativity relevant to the environment

There are 246 Cities in the global UNESCO Creative Cities Network, all working towards ‘placing creativity and cultural industries at the heart of their development plans at the local level and co-operating actively at the international level’.

All designated cities must demonstrate their commitment to their city’s social, economic, learning and cultural needs, and show how their creative field is relevant to their environment.

Nothing could illustrate that better perhaps than Perth – City of Crafts and Folk Art – which created Lost/Found, a major project developed as a response to the deaths suffered during the global pandemic. Bereaved families worked alongside makers and artists to produce memorials for an exhibition to mark the impact of the pandemic.

The language UNESCO uses to designate cities may sound dry, but when my term on the Commission ends, I know that I will be trying to inveigle my way into keeping involved with the people inspiring such brilliant work.

Karen Merkel is a Non-Executive Director at the UK National Commission for UNESCO.