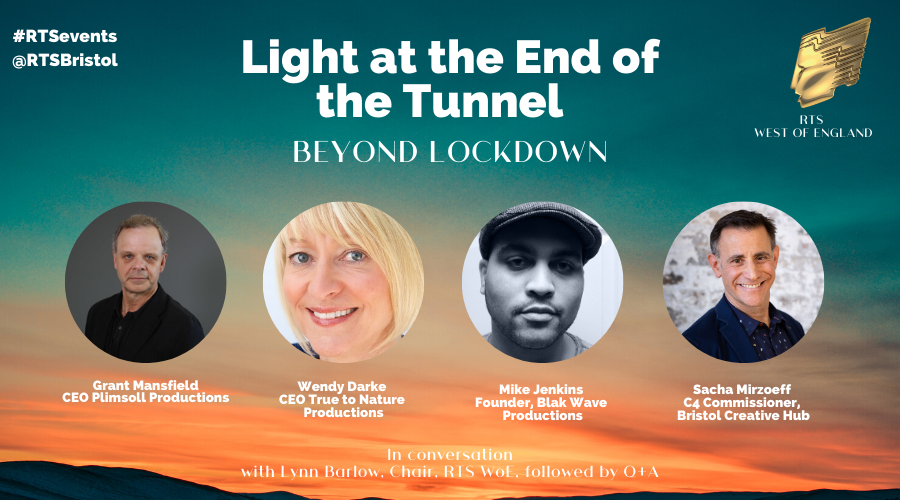 The following article is written by Matthew Bell and was originally published on the RTS West of England website.

The TV industry needs to appeal to broader audiences, says the panel of the latest RTS West of England event, “Light at the End of the Tunnel: Beyond Lockdown” (24 June 2020).

“The [TV] industry genuinely is changing for the better, but we are where we are because lots of people have talked about stuff and not enough people have done anything,” added Grant Mansfield, CEO of Plimsoll Productions.

“The media sector has not done enough,” he added, discussing its attempts to improve diversity.

“We’re trying to appeal to broad audiences. How on earth can we do that if it’s all being seen through the prism of a bunch of middle-class white people? They should be part of the group, not the whole bloody group.”

Mansfield was part of a panel assembled for an RTS West of England webinar in late June discussing the health of the region’s TV production.

Coronavirus, as it has countrywide, has hit the South West hard. The Creative Industries Federation forecasts that the region could lose almost one third of its creative jobs, some 43,000 in total.

He filmed the Bristol protest, which saw the statue of slave owner Edward Colston thrown into the harbour. “We managed to capture history. We were in the right place at the right time,” he said.

Jenkins approached Sacha Mirzoeff, head of Channel 4’s Bristol hub, who commissioned the indie to make The Shadow of Slavery for its week-long series of short films in response to the killing of George Floyd, Take Your Knee Off My Neck.

“We’ve battled through. I think we’ve done some positive commissioning during Covid, with fast turnaround shows that have been extraordinarily reflective of the nation,” said Mirzoeff. “There are challenges but we’ve adapted and we feel far more fleet of foot. There’s lots to be excited about, particularly in the West and Wales – we’ve got commissions coming in thick and fast.

“What’s on the shelf is pretty bare. Broadcasters are going to need programmes to be made… I know it’s tough… but we can look forward to some exciting times ahead.”

Natural history specialist True to Nature Productions continued to film in the UK during lockdown although, with overseas travel coming to a standstill, filming on the second series of Expedition with Steve Backshall was suspended.

The company hopes to film abroad in the autumn. “We’re looking, where possible, to work with camera people who live in the parts of the world where we want to film,” said CEO Wendy Darke.

Mansfield added: “We need to be able to get on aeroplanes and get into other countries.

“The response and competence of our Government is pretty significant … there are certain countries where we want to film at the moment, where we’ve been told explicitly… that if you form a queue of people that they want in the country after coronavirus, the Brits would be at the back.”

Looking back over lockdown, said Mansfield, Zoom has been “no substitute for creative people getting together and discussing stuff. The sooner we’re back in rooms together, sharing ideas, the better.”

Plimsoll shut down its offices with lockdown, but 90% of the 250 people who work in the indie’s main Bristol office “continued working as normal”, with just 10% furloughed. The company made up their salaries from the 80% paid by the Government to the full level. It hopes to have “a significant number of people” back in the office by the end of July.

‘Light at the End of the Tunnel’ was chaired by RTS West of England Chair Lynn Barlow.