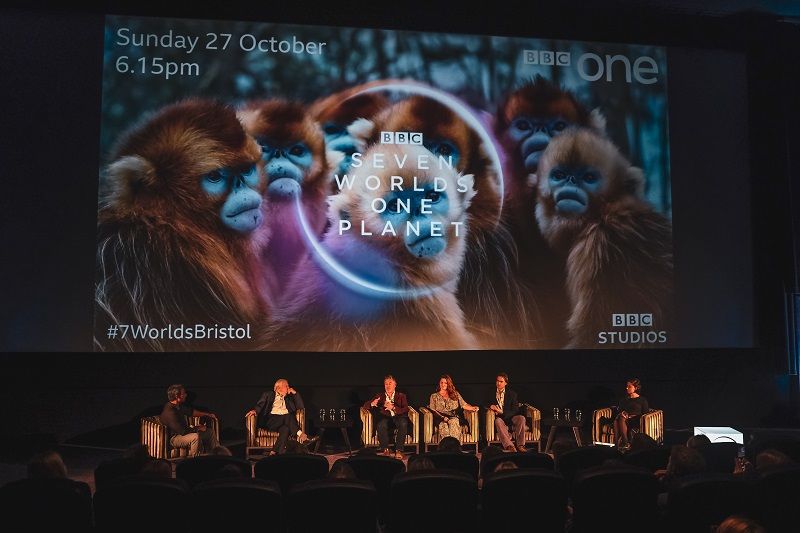 After a public ticket ballot that saw more than 80,000 people apply for tickets, it was a packed auditorium of 300 that settled in for the Bristol preview of Seven World One Planet at Showcase Cinema de Lux on 23 October, introduced by Sir David Attenborough.

Head of the BBC NHU Julian Hector began the evening, by sharing some staggering statistics about the new series, which was four years in the making, shot in 72 countries with more than 1,500 people involved in its creation, before introducing Sir David to the stage.

Praising Bristol as a “special city” respected around the world for its wildlife filming, Sir David expressed his admiration for the increasingly impressive footage that producers are able to shoot with advancing technology, before introducing the first episode, Antarctica (which took 236 days to film).

A panel discussion followed featuring Sir David with executive producer Jonny Keeling, assistant producer of the Antarctica episode Abigail Lees, producer of the Antarctica episode Fredi Devas and Caroline Cox and the production manager of Seven Worlds series, hosted by BBC presenter Sabet Choudhury. Sir Davdi provided a passionate update on the climate emergency, acknowledging that people in the majority of countries have woken up to problems caused by the use of plastic, but urging people he urged people to remain aware, saying “when you drop that piece of plastic it may not seem important, but it is.”

Seven Worlds, One Planet presented by Sir David Attenborough, reveals how each distinct continent has shaped the unique animal life found there. It features remarkable, new animal behaviour from all the continents including the baking plains of Africa and the frozen waters off Antarctica. In Asia, the biggest of all continents, it showcases life at the extremes, whilst in Europe it reveals surprising wildlife dramas hidden right alongside us.

The series celebrates the diversity of life on each of these continents, but also features the many challenges faced by animals in a modern world dominated by humanity. By telling unknown, unseen and unexpected wildlife stories, it uncovers the fundamental truth about what makes each one of our seven worlds unique.

Seven Worlds, One Planet was made by BBC Studios’ Natural History Unit (NHU), which has been based in Bristol for more than 60 years.

All images courtesy of BBC Bristol.